We hooked the cavity up to a better network analyzer this week:

and zoomed in on the frequency we are interested in and after tuning a bit, got:

Mehh.  The results show an insertion loss of 1.6dB and after playing with the tuning, it is apparent that the cavity is sensitive to flexing. By putting pressure on the cavity, for some reason the insertion loss would drop to 1dB and the resonance got much better, as deep as 40dB.  The calculated Q for this test was a paltry 360 which is tens of thousands lower then expected.  The likely cause is fabrication tolerances which means a second more accurate method of fabrication resulting in a stiffer cavity may be necessary.  I am currently considering a few alternatives, for example: trying a higher frequency, say 6Ghz, which will drop the size the cavity considerably making it significantly easier to build.  Another option is to purchase a CNC table and do the milling myself.

Another improvement would be better probe mounts, but not a single one of the vendors I sent RFQs to responded, hurumph.

I was also looking at the typical specifications of magnetrons and they produce a frequency of 2.45Ghz ± 10Mhz, which means the frequency could be as high as 2.460Ghz or as low as 2.44Ghz.  One of the tests that will be performed is to measure the center frequency of our commercial grade magnetron and then test to see if it wanders during use or between cycles.  If it is stable, then we should be able to tune the cavity to resonate at just the frequency of our magnetron.  We are waiting on the spectrum analyzer at the university to be fixed.

In order to control the frequency of the magnetron, It might be possible to use a feedback mechanism called a phase-lock-loop to center the magnetron frequency at 2.45Ghz and there is a paper that talks about a simple method here.

I also worked on the vacuum chamber this week, adding a hook to the top in order to keep the acrylic closed.  I got the extra seals this week and will replace the temporary green seal (shown below on the right).  It takes about 15 minutes for the chamber to pump down and the lowest it has gone is 19 microns which is only 2.5% of atmosphere and only 1 micron above the lowest expected (18 microns)

I was happy to note that after a certain pressure, even with the pump running, the gauge starts to show a dropping pressure.

With a vacuum, the 1 inch thick acrylic deflects inward as shown by the shots below: 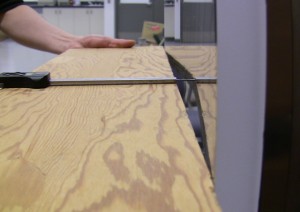 The center of the acrylic is depressed 9mm!

Below are the calculations I carried out back in September of 2009 that says the windows has a safety factor of 7 times.

I found a handy power point slide here, which shows how to calculate the safety factor for a given strength versus diameter for a vacuum chamber window.  It turns out that for an acrylic window with 25″ diameter of unsupported space and 1″ thick, it has a safety margin of 7x.  In other words, the window can handle over seven times more air pressure before breaking.

Here are the calculations I carried out:

First, calculate the stress on the window for a known thickness versus radius (from the power point slide):

Sm=k(wR^2/t^2) where
Sm – the stress on the window in PSI
k – is the coefficient for circular plate, I used 1.1 which is a conservative estimate.  This constant is described in the power point presentation.
w – the uniform pressure across the window, which because Edmonton is ~2300ft above sea level, means our air pressure is 13.66psi.
R – is the radius of the unsupported part of the window, in our case 12.5″ or half of the 25″ diameter (this was reported by the vendor)
t – is the thickness of the window which in our case is 1″, 1.5″ or 2″

The stress on a 1″ thick acrylic window 25″ in diameter is then Sm=2300psi and the safety factor of cast acrylic is then calculated by: